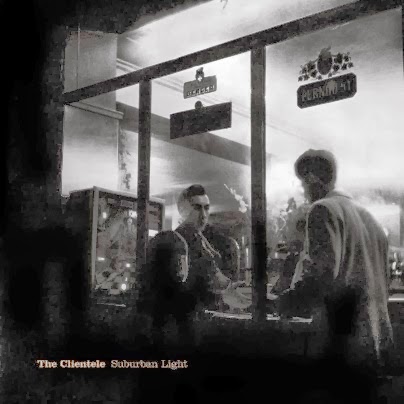 Our first record, Suburban Light, is getting an expanded reissue by Merge Records in May. Both vinyl and CD versions will have an extra disc with 30 minutes of rare and unreleased stuff, which we compiled by slowly and painfully going through a carrier bag of old portastudio master tapes over Xmas.

It was quite surprising what we found - songs we'd recorded and sung but completely forgotten - a string quartet prelude to a tune that was never finished (how the hell did we even know a string quartet?), an expensively recorded brass quartet-led version of What Goes up which was so out of tune as to be unreleasable other than for comedy purposes. A cover of a Jacques Brel song sung in original, and horribly English accented French. It also brought me back to a well remembered space from the past.

We recorded most of Suburban Light in the room above guitarist and singer Innes Phillips' garage in the summer of 1996, after finishing at University and signing on to the dole. We had an 8 track portastudio and two mics. We sang through guitar amps ‘cos we liked the way their reverb sounded on our voices. We couldn’t afford a guitar tuner. Below you can see us playing in his garden in 1994. Really fighting the urge to be nostalgic here so will just say a. look at that Luna t shirt! and b. it's a really special feeling when someone thinks stuff you did when you were young is worth revisiting.

Suburban Light is out May 13. The Clientele are playing a special one-off show at the Bell House in Brooklyn, NYC on March 21st.
Posted by Alasdair at 4:17 pm

You know the bit in 'Rain' where it skips? Have you left that bit in? I hope so.

Buy the record and see!

Cool shades, Alasdair. Love how eerie this early stuff sounds. You guys made the late 90's so much better, will always be thankful for that. Loving to see the band together again. Was at you last London show in December 2010 with Damon & Naomi opening. Lots of snow that day, and a magical night.

Looking forward to picking up Suburban Light on vinyl. And a ADD show in DC would be most welcome this year!

Hi Alasdair - what excellent news, magical air about alot of those tracks for me.....
two questions, where is the UK pre order/sale happening?
and
where is 'emptily through holloway'....? I too was a home counties suburban young man at once lost and enthralled by London, and I too even had to trudge very often down Holloway, (road at least)......

Alex said...
This comment has been removed by the author.
8:48 am

Just saw the news about the tour. Is there really no way to expand it a bit and maybe include Atlanta or better yet, Athens, GA?

My favorite record ever. This is fantastic news. Those riffs in, "I Had To Say This" and "We Could Walk Together" still give me chills.

Am I just a photograph inside a printed night?

Loving the reissue, will hopefully fly out to see the San Francisco show.

This is such an awesome collection of songs. On vinyl, plastic, metal whatever. I love it to death.

Any chance of a Violet Hour vinyl re-issue in the near future? The original pressing is scarce and expensive!